Wondering what the Essential insights newsletter is all about? Read this sample below. We send out insights about once a week (sometimes a little more if there’s a lot happening in the market).

This newsletter you’re about to read is only $3/mo.

That’s right, for less than the price of a drip-coffee you can sign-up for it below and get complete access to regular insights like this – and take advantage of the cryptocurrency market.

Here’s an actual example of a newsletter that was sent out – it’s packed with insight:

It was the largest Bitcoin (BTC) and Ethereum (ETH) selloff ever. Yes ever. It represented a 15% drop in BTC, and over 55% drop in ETH on one exchange. Yes, ladies and gents, you’re now in the crypto world – and you should expect and prepare for this to happen more as we move forward in the space.

These times represent opportunities, and also massive danger zones should you decide to play the market unwisely (we’ll get into this more later).

Where does growth come from? It’s probably not what you think. Here’s Clay Christensen (Innovator’s Dilemma, Harvard Business School prof) talking about growth in a chat he did at Google a few years back. He’s passed away, but his work is still super influential in the tech world:

There are so many things to talk about here, this newsletter would be 10pages if I jumped into it all. So let’s cover some of the highlights.

We’ve got to remember that while you might be new to the crypto world, there are people who’ve been in it for years. Some almost a decade. While we’re getting comfortable with $30-$60k price points…these people got in the market when BTC was below $1000. Some when it was below $100 or even $50.

You’d likely take some profits, and would be smart to do so.

And if you had a lot of Bitcoin (which I know we all wish we did), you might sell a few hundred of them to make the x-million that would change your life. 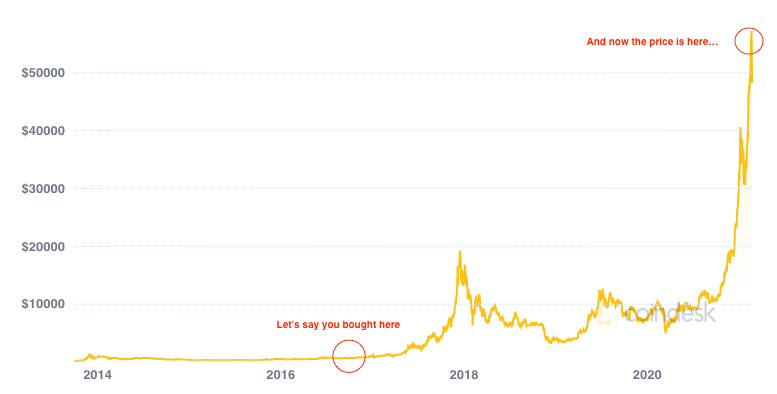 But there are two things to consider about all of this:

The two points listed above can, in many cases, cause a domino effect of selloffs if certain thresholds are hit.

Thus, if an old BTC holder sells off, let’s say 1,000 BTC for a x-millions, that might spook others to sell and might cause a dip on a couple of exchanges. This dip could trigger stop-losses (points at which people set an automatic “sell” so they can ‘stop any more loss’ in their position). This naturally means their cryptocurrency is sold, further pushing the price down and triggering both 1) more fear, and 2) more stop losses.

This is likely what we saw on Monday morning.

And when it happens, it happens very quickly. It took less than an hour for things to tank. Here’s what it looked like: 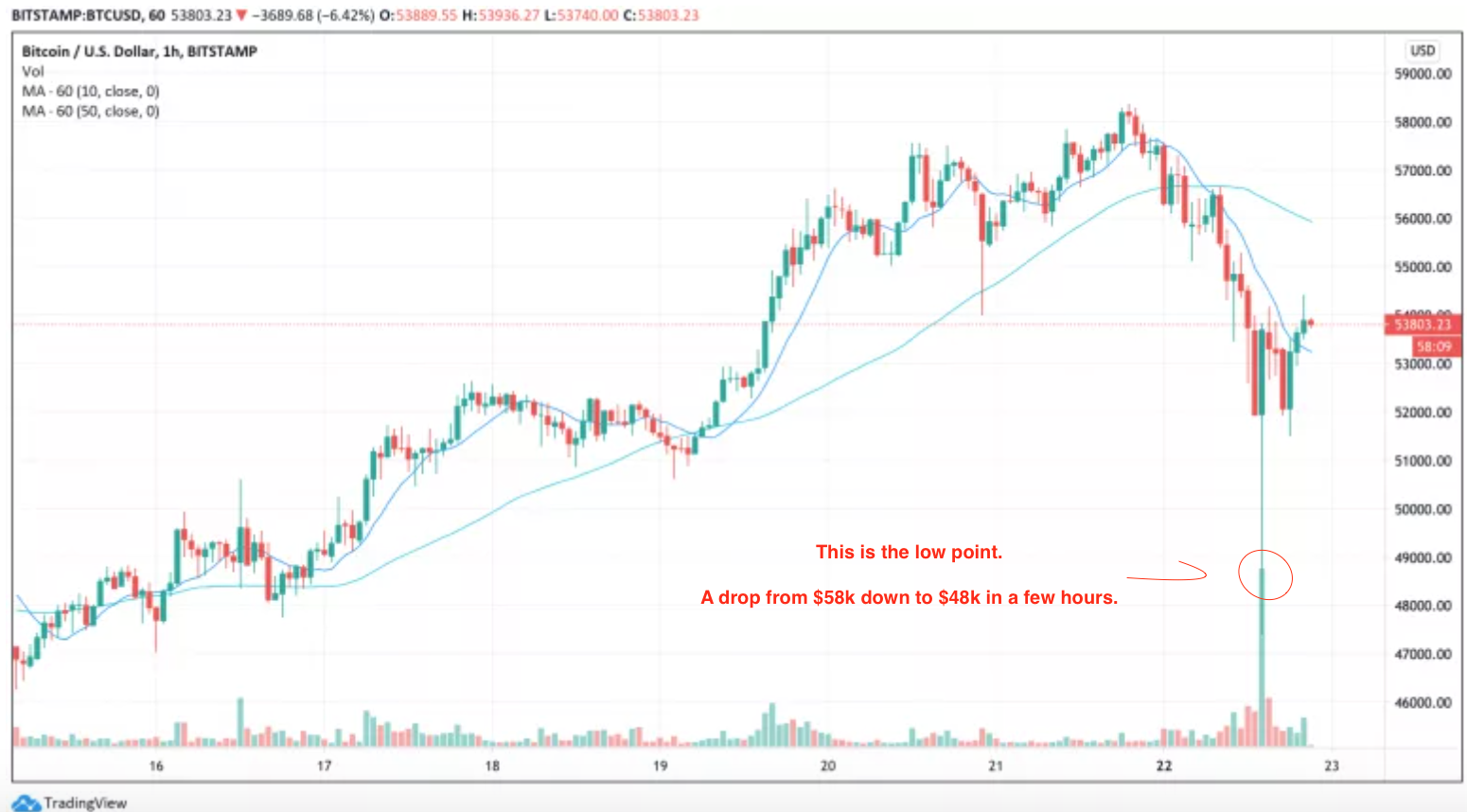 BE CONSIDERATE WHEN YOU’RE MAKING MOVES INTO THE MARKET. UNDERSTAND THAT LARGE DROPS CAN AND DO HAPPEN.
LESSONS LEARNED FROM LOSS
Here are a few lessons I’ve learned from losing money in the markets. Clear the air and the emotions, because losses are bound to happen from time-to-time. Let’s jump in:

NFTs ARE CRUSHING IT

If you’re not a techie or a dude (yes, many of the people in the NFT space are dudes) then you might not get the hype around collectables.

So let’s think about it in another way.

Humans it seems, have a propensity to value what is rare. I believe this likely comes from ancient times, where a rare item might actually give you a survival advantage.

This instinct has not left us. We still value what is rare. Only now we’ve got 1000s of niche areas that groups of people around the world can congregate around. And in each of these niche’s there are things that that group would consider “rare items”. These would naturally hold significant value to that group.
Enter collectables.

It could be anything. Unboxed GI joes or Barbies. Sports cards. Comics. Rare watches. Pens. Notebooks from famous people. The list goes on and on.

Some niche groups are larger than others (think sports cards) and so typically the rare items in this group will command a much higher price than items from smaller niche groups. It’s really a supply and demand function.
Now however, we’re in a digital world, where copying and duplication are as easy as the click of a button.
And, you’ll notice, that because of the ease of duplication on the web, the things that we once found valuable in a non-digital world (pictures, music, books, news, etc.) are now in such abundance that they’ve basically approached a $0 price point.
That is until NFTs.
This digital pice below, sold for 420 ETH (yes that’s about $650,000). Source Coindesk. 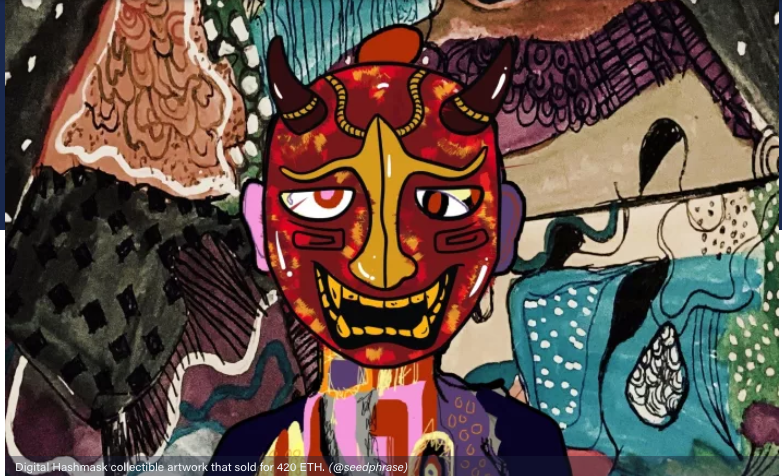 NFTs (Non-Fungible Tokens) are unique, one-of-a-kind (or one-of-a-code) tokens, that represent digital collectables. Because the code base for that token or item is unique, a collector could easily identify if it’s a ‘real’ version of the item or a ‘fake’ copy.

NFTs then (Non-Fungible Tokens) are tokens (or cryptocurrencies) that represent digital collectables. Like a limited edition one-of-a-kind Silver Dollar from the US Mint, they are unique pieces of code that cannot be duplicated or copied. Because they’re unique, cannot really be traded like other cryptocurrencies. Hence the term Non-Fungible Tokens or NFTs.
*Un-pause*
People buy them with cash or other fungible-tokens (Bitcoin, Ethereum, etc.) instead.
And this market is taking off like a rocket.
If you’re the type of person who really understands and knows how to value collectibles in different markets, then this space is a very exciting opportunity.
While we do seem to be in a bit of a hype-cycle for this, I’ve interviewed the CEO/Co-Founder of the largest platform for trading/buying selling collectables (OpenSea) a couple of years ago and found the idea of digital collectables fascinating.
I feel like we’re bound to see more fractional ownership in digital or real art (whereby you could buy a 1” square of the Mona Lisa for $1m type of thing). It’s a great space to keep an eye on if you’re into that type of thing.
This LeBron video highlight sold for over $71,000 on Top Shot an NBA NFT marketplace. Another similar to this was purchased for over $200,000. 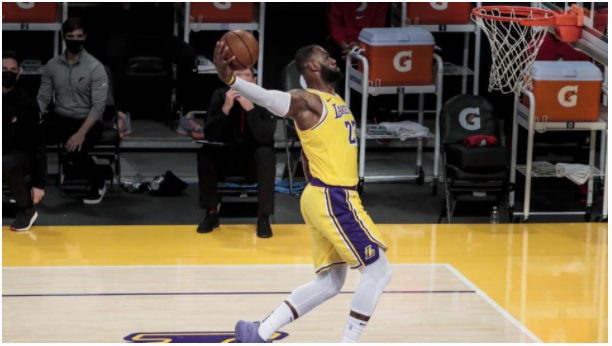 Found insight and value in what you just read?

Sign-up below – and get insights on crypto, investing, digital culture and more.

What readers are saying